With season ticket or single class from nunArt Guinardó.

These workouts will guide participants through an exploration of their movement from the observation of body structure as a whole. We will play with research that will help us locate unnecessary physical blockages and tensions, to inform us about our movement patterns and to develop a greater intuition in our improvisation skills and movement functionality.

We will work from the principles of biomechanics and the practice will aim to bring fluidity and a "soft power" to our structure and joints from the application of games and the investigation of various body states. Inspired by concepts from different disciplines such as martial arts, contact and somatic practices, the class invites us to listen to the internal movements of the body and be inspired by them to creatively compose each moment with more sensitivity.

"My interest is in moving away from the urge to do and practice sensitive listening quality, to allow our structure to flow freely in the changing landscapes of dance."

Clémentine Télésfort is a French dancer who has been performing and teaching both in Europe and Asia since 2012. She trained at TrinityLaban in London and later at the Verve Company of the Northern School of Contemporary Dance in Leeds where she received the Outstanding Achievement Award. Since then she has worked with companies such as Guy Nader and María Campos Company, Lali Ayguadé Company, Anton Lachky, Jamaal Burkmar and Gecko in England.

In addition to being a performer, Clémentine has developed her own choreographic language over the years and her works have been performed at various festivals in Europe. She also continues to investigate different disciplines such as physical theater and clown, contact, or the study of somatic practices and martial arts such as Systema (Russian Martial Art) with Rob Poyton and Alexander Solovyev and Play-fight with Bruno Caverna. In 2019 she curated and directed the first edition of an International Rural Cultural Festival, the "PinkHouse Festival" in northern France. 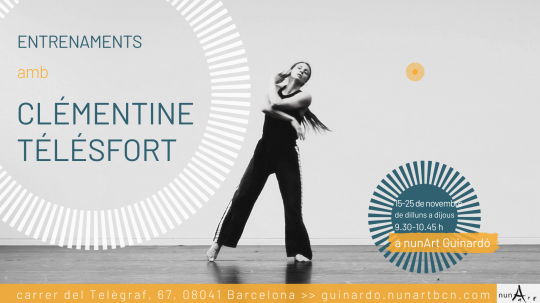