Attention! Activity starts punctually at 9.30, and at 9.35 we close doors. There is no bell at nunArt, you may not be able to enter if you are late.

With ticket or single class from nunArt Guinardó

Since 2020, Joana and Leonardo have been developing shared practices and collective research in the field of contemporary dance, contemporary circus and magie nouvelle. Their research has already culminated in 4 creations with joint influence that have traveled through Portugal, Bulgaria and France. The duo's practical research is directly influenced by the choreographers/dancers with whom they worked along the way, notably Roberto Olivan, Hélder Seabra and Aragorn Boulanger, differing from them by a more theatrical aspect.

From these 3 main branches, Joana and Leo will propose intense exercises that strengthen the base of each of these techniques and that also provide tools for the dancer to explore them at a deeper level and autonomously. Special attention will be paid to body fluidity and core stabilization, combining the waving technique with floorwork. Sequences of intense movements, guided improvisation exercises, acrobatic explorations and research work in pairs will be proposed.

In a second stage, it is possible to begin to combine the comfort gained with the techniques described above with tasks more aimed at composition, in addition to the exploration of physicality, adding a theatrical purpose, directed or not, to a predefined concept. This second layer of exercises allows us to look at them differently and integrate other, more multidisciplinary fields aimed at artistic creation.

Joana Couto began her career with 15 years of specific study at Ginasiano Escola de Dança, graduating in 2017, in Portugal. She took intensive courses at Carte Blanche and Malandain Ballet Biarritz. She continued her dance and choreography studies at ArtEZ University of Arts, the Netherlands. Since 2016 she has been working as a dancer at Kale Companhia de Dança, with choreographers such as Osa + Mujika, Christine Hassid and Gilles Baron, and since 2019 with Companhia Instável for the creations Timber by Roberto Olivan and Lowlands by Hélder Seabra. As a choreographer, she created "If only this was about food", for the Teatro Municipal do Porto, and "Sinto Muito". She is also co-director of Festival Súbito, an emerging art festival in Vila Nova de Gaia.

Leonardo Calvino (pseudonym of Iuri Martins) had a multidisciplinary career, passing through martial arts, music, comic scripts, circus, magic and is currently dedicated to dance as a research territory. In 2020 he completed the FAICC (Advanced Training in Interpretation and Choreographic Creation) at Companhia Instável. In the same year he was invited to perform in Percursos the play “Prologo dos Marinheiros”. His repertoire includes the multidisciplinary work “Cegos do Castelo” (Porto, 2019), the dance/circus piece “Meeting the Unknown” (Lousada, 2019), the sound immersion “As Águas” (Castro Daire, 2019) and “Navio Song” (São Paulo, 2018). In 2021 he premiered “Inercia”, where he directs and performs, with the support of AgitLab, Armazém22 and Festival Súbito. His creation “Apneia” has national and international support and is scheduled for 2022. Since 2019, he has also worked with dramaturgy, lighting design and creative accompaniment. 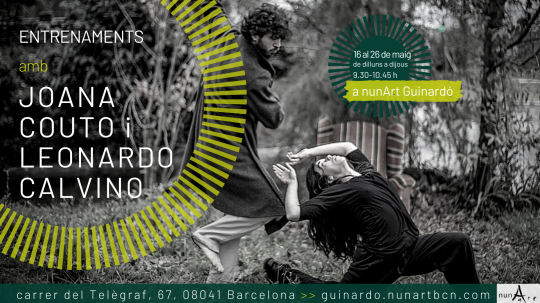