Attention! Activity starts punctually at 9.30, and at 9.35 we close doors. There is no bell at nunArt, you may not be able to enter if you are late.

By reserving your place, you accept this statement of responsibility.

With ticket or single class from nunArt Guinardó.

In this workshop I propose to articulate our "dance discourse". We will explore the expressive power of dance in the abstract. Through improvisation and guided exercises we will establish a common vocabulary with which to communicate. We will experience the body as a mobile architecture that is transformed, we will investigate some of its infinite possibilities by working on different dynamics, textures and qualities of movement.

We will work on the musicality of our movement, such as talking or singing with the body, and our relationship with space, our stroke, drawing and its duration. The aim is to challenge the ephemeral and thus transform our perception of time and space. We will start from physical principles, to then get to the emotion of the performer and the receiver.

Patricia Hastewell Puig, is a dancer and choreographer. She studied dance at the Experimental Dance Academy of Salzburg SEAD after graduating in Law from the University of Barcelona.

She has worked for various international companies such as; the physical theater company Jasmin Vardimon from London, in the production “Medusa”, the Barcelona company Guy Nader / Maria Campos in “Set of Sets”, the French company Kubilai Khan in “Something is Wrong” and was part of the production of Saddlers Well's London “The Only Tune” with Irish choreographer Michael Keegan Dolan. Founder of the group La Otra Familia, her pieces, Bardo Vals and All these places have their moments have been performed throughout Europe and the latter won the audience award at the Madrid Choreographic Contest 2016.

Guy Nader / Maria Campos' new creation at the Grec Festival 2021 has just been released, "Made of space", has been selected in the Apdc's "Balla'm un llibre 2021" project with his piece "El ball dels closings ”and is working on the new duo of La Otra Familia,“ Deriva ”. In addition to performing and choreographing, Patricia has been teaching since 2016, giving contemporary dance workshops at many European festivals and in 2019 she created a piece for students at the Institut of the Arts Barcelona. 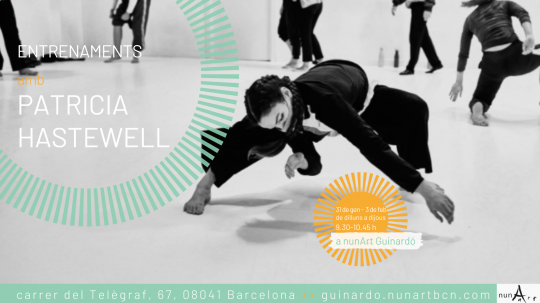