By reserving your class, you accept this declaration of responsability.

With ticket or single class of nunArt Guinardó.

Classes based on improvisation and guided warm-ups. It will be a physical work, each participant chooses the intensity and quality with which they want to face the proposals and the exercises. We will analyze and observe the anatomy of the body in movement, to observe mobility and joint capacity and from which motor points movement can be created or a part of the body can be moved. The use of all the technical knowledge of movement and body awareness of each person will be encouraged, as an excuse to warm up, open, prepare and train the body, without the need to be a professional dancer.

The idea is to observe the body / space / mind. Awaken the senses to open and sensitize the body to movement. And always add a little joy, pleasure and creativity. Prepare the body as much as possible to be available for a rehearsal or for a show or for the joy of dancing. Choreographic material from the companies Rober has worked with will sometimes be used for certain memory exercises or quality of movement.

Graduated in Dance at Institut del Teatre in 2005. He has worked in companies such as IT Dansa, Bonachela Dance Company, Galili Dance, Gelabert-Azzopardi, Staatstheater Oldenburg, Staatstheater Mainz, Cooperativa Maura Morales, Club Guy & Roni, La Veronal, Sol Picó and also with Eulàlia Bergadà and Ariadna Montfort (Instituto del Teatro Dance Awards 2015/2016), among others. As a repeater, he has worked on the replacement of pieces by Guy Weizman for the company Ballet Konzert Bern, and at the Higher School of Arts (AHK) in Amsterdam. He has also been trained in Ashtanga Yoga and its pedagogy. She currently teaches dance classes and workshops in Barcelona, in centers such as nunArt, Area espai de dansa y creació and La Caldera. He is a member and founder of Hotel Colectivo Escénico with which they will premiere their fifth production in December at Mercat de les Flors. 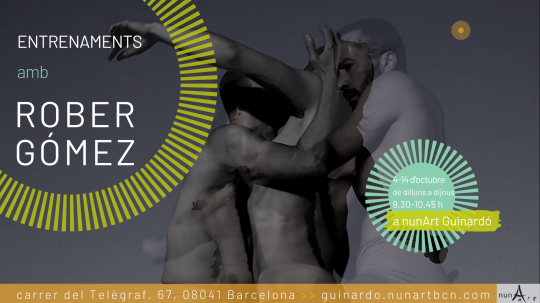