With ticket or single class from nunArt Guinardó

We are proposing juggling and movement classes. The basis of the classes is our investigation in the manipulation of objects, which is influenced by concepts of physical theater and contemporary dance. Classes focus on juggling basics, to later develop on the concepts of surprise and "fail" on stage.

Nils is a German juggler, who has studied at ACaPA (Tilburg, The Netherlands). He is a club and ball juggler and likes to include dance and movement in the way of juggling him. Using these tools, he likes to create a mood or atmosphere on stage. Elise is a French juggler who has studied at CRAC preparatory school (Lomme, France), Flic (Turin, Italy) and ACaPA (Tilburg, Holland) and is specialized in club juggling. 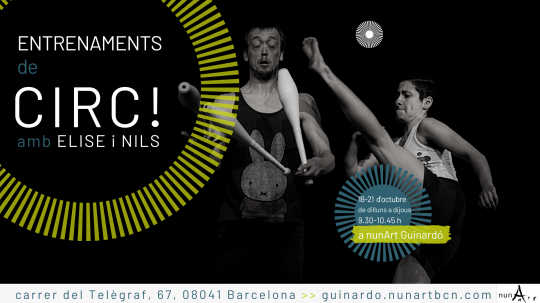