By reserving your place, you accept this declaration of responsibility

From the experimentation of gravity, to the use of distributed and transferred weight, to relaxation and / or tension, this physical workshop will help the dancer to understand his own body through very clear improvisation guidelines.

She will also share performative and creative work to take the movement beyond what it usually does. The use of voice, emotions and focus on the parts that are free, to express gesture, abstract movement and theatricality, will lead the dancers to discover new facets of themselves.

Born in 1980, Lali Ayguadé trained at the Institut del Teatre de Barcelona and P.A.R.T.S. directed by Anna Teresa de Keersmaeker. She began working in Denmark with the Publik Eye company, with playwright Carmen Mehnert before joining the Akram Khan Company and Hofesh Shechter in London. She also worked with Marcos Morau, Roberto Olivan and Baró d'Evel among other artists. In 2005 she created “Twice read” together with Slovakian artist Anton Lachky. Between 2007 and 2009 she created small format pieces with the acrobat and clown Joan Ramon Graell. In 2012, she created a trio called 'Little Me' with Korean dancer Young Jin Kim and acrobat Joan Català, which premiered at the Mercat de les Flors Salmon Festival in Barcelona. In 2013, she decided to found her company in Barcelona creating two short duos: the now emblematic 'Incognito' and 'Saba'. In 2015, she began an investigation around the concept of identity that began with the creation of her first full-length album 'Kokoro', followed by 'iU an Mi' in 2017 and 'Hidden' in 2020. Her tireless hunger for collaboration has led her to work alongside Julian Sicard in 'De Camino al Otro', with Joana Gomila in 'Sa Mateixa' and Guilhem Chatir in 'Here' in 2018. In 2010, she was nominated for best dancer at the London Critics' Choice Awards and in 2014, the best creator. In 2016 she was nominated for best dancer at the Crítica Recomana.cat Awards in Barcelona. She has participated as the main actress in the short film 'Timecode', which has been awarded the Palme d'Or at the Cannes, Goya and Gaudí festivals, among others, as well as being an Oscar finalist.

Akira (Pamplona, Spain), was casually introduced to break dancing at an early age. Over the years, he began to participate in competitions, winning more than 60 prizes in Spain, France, Argentina and Austria. At age 23, he began to transition as a contemporary dance and performing artist. He began working on three productions with 'Quiero Teatro' and in the Azala 2 duo of Jordi Vilaseca's company. After obtaining a scholarship, he studied art at SEAD (Experimental Dance Academy of Salzburg) before joining the Hungry Sharks companies in 'Hidden in Plain Sight', by Francisco Córdova's company Physical Momentum in the piece 'TO BE', with Roberto Oliván Performing Arts in his production “Cuculand Souvenir”. He also performed the 7-hour piece "Who is Frau Troffea?" by Ceren Oran, who performed eleven days in a row in Munich. Akira also created his own single “Home”, with which he has been touring for three years, and “Burial of The Bark” (2019-2020). He co-created the duets “Gizaki” with Lali Ayguadé, “Hito” with Chey Jurado, “Ahotsak” with Ziomara Hormaetxe and “La ignominiosa fortuna de ser interpreter” with Dunya Narli. In addition to working for other companies and doing his own work, Akira has worked as an assistant to Lali Ayguadé in the creation of the Verve Company “Shelter”. He recently joined the cast of 'Hidden', a Lali Ayguadé Company production and shares his time between performances and workshops around the world. 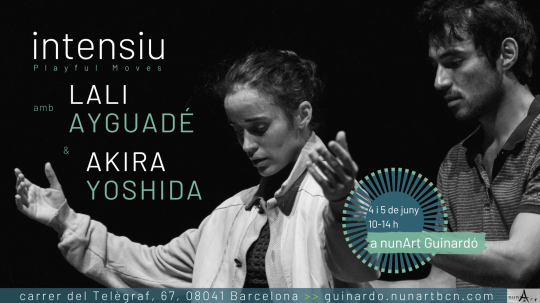