This workshop proposes a technical work approaching the movement based on an articulated body, soft, agile, fast and powerful. We will use the richness of movement of the spine as a motor: curves, twists, spirals, chained movements, ripples and combined sequences. And we will pay special attention to the functional use of anatomy for the maximum potential of movement. We will go through ground practices, rolls, simple acrobatic movements, jumps and gliding. We will investigate the combination of supports and weight transfers that, through observation, listening, the sense of collaboration and physical reflexes, will be deployed from subtlety to paths of greater complexity. And we will put into practice the different scopes of look, detail, accuracy and play.

Graduated in contemporary dance in the MTD / AHK - Higher School of Arts in Amsterdam, in 2005 she was awarded a danceWEB scholarship in ImpulsTanz in Vienna and trained with former Olympic gymnastics coach Jaume Miró in Barcelona.

Her own work has received international recognition with several prizes (for pieces The lizard's skin, Còncau, Miniatura) and is habitually present at international stages with works such as Lowland, November and Hand to hand. In 2017 she created L'estol for the National Dance Production of Catalonia, which was Nominated for Best Choreography 2017 at the XX Critics Awards. In 2019 she premiered the group piece Trama in Mercat de les Flors in Barcelona, which was Awarded Best Choreography 2019 at the XXII Critics Awards and Nominated for Best Choreography 2019 at XXV Premis Butaca (audience awards).

In 2020 she collaborated with company Skånes Dansteater for the third time, with the premiere of Fine Lines for the inclusive dance program Europe Beyond Access, followed by a European tour. And she premiered Revel Revel for the Zagreb Dance Company (Croatia). Also in 2020 her piece November was Nominated twice at the XXVI Butaca Awards: for Best Choreography and for Best Dancer (Roser López Espinosa).

She is a guest choreographer for international companies, such as Skånes Dansteater (Sweden), Conny Janssen Danst (The Netherlands), Zagreb Dance Company (Croatia) and MiR Dance Company (Germany), among others. She is guest choreographer for the pedagogic project TanzPakt Voorpormen Tanz An 2021 for creation and classroom tour in Germany. She also collaborates with circus companies such as Circ Pànic in Catalonia and Compagnie XY in France. She is a guest teacher at international centres and festivals.

She has received the support of Dansateliers in Rotterdam (The Netherlands) for her creation work. She is an associated artist in creation centre La Caldera and she is a resident artist in theater Mercat de les Flors 2018-20 in Barcelona. Her choreographic work has been programmed in European and Latin American international festivals as well as in Egypt, Canada and Japan. 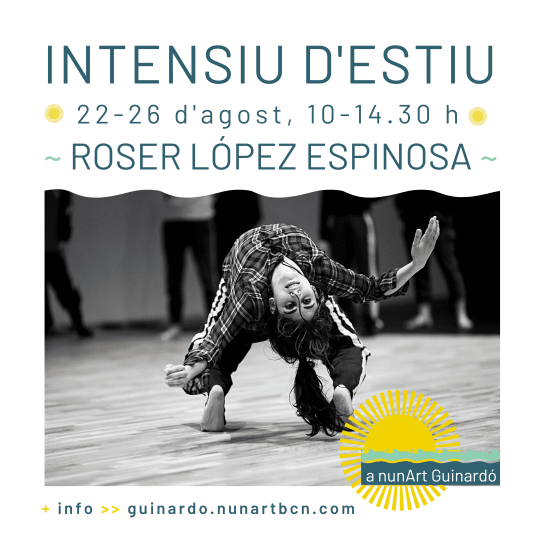