Since 2017 Lisard (CAT) and Clémentine (FR) have been developing a shared practice influenced by their various encounters and experiences in international companies such as Guy Nader & Maria Campos or Lali Ayguadé. From there, they began facilitating workshops for professional dance and circus artists and are regularly invited to conduct seminars at institutions and professional training programs.

The workshop is aimed at people from all disciplines interested in expanding their partnering experience and perfecting their ability to connect and listen to others.

We invite participants to investigate four main aspects of our practice as artists: sensitivity, control, availability, and creative adaptation. The class will address the efficiency of movement, the quality of reading the other's movement and the search for a balance between the intentions and the outcomes of our shared exploration. We will offer several tools that will help to deepen the understanding of the fundamental principles used in partner work, such as: sharing and transferring weight, generating and using momentum, dealing with changes in direction, speed and levels, economizing on force and differentiating it from potency, cultivating confidence and security in shared and balanced roles. We wish to share tools that allow participants to investigate their own original movement and challenge their practice as artists beyond technical limitations. We are interested in the quality of the relationships we cultivate with ourselves and with others, forming a sensitive and receptive body that can unleash our imagination and support our performative state.

Clémentine Télesfort is an award-winning dancer who performs and teaches internationally. She trained at TrinityLaban in London and then at the Verve Company graduate school of the Northern School of Contemporary Dance in Leeds where she received the Outstanding Achievement Award for that year. She has worked with companies such as Guy Nader and Maria Campos Company, Lali Ayguadé Company, Anton Lachky, Jamaal Burkmar, and Gecko. Along with her performance, Clémentine has been developing her own choreographic language and her works have been performed at various festivals in Europe. Since 2015 she has been invited to give workshops at different festivals and institutions in Europe and Asia. She also continues to research and practice different disciplines such as physical theater and clown, Contact-Improvisation or studying somatic practices, Systema (Russian Martial Art) and Play-fight with Bruno Caverna. In 2019 she commissioned and directed the first edition of a Rural and International Cultural Festival, the PinkHouse Festival in northern France.

Lisard Tranis was trained at the Barcelona Theater Institute. Right after her graduation, she won first prize in the Barcelona International Dance Competition. Subsequently, she joined Verve, the Northern School of Contemporary Dance graduate, and received the Outstanding Achievement Award that year. She has been working with Guy Nader and María Campos, Lali Ayguadé Company, Phoenix Dance Theater, Hagit Yakira Dance, James Wilton Dance and Cia. José Besprosvany among others. Apart from acting on stage, Lisard gives workshops and lectures in various festivals and countries around the world and has a great interest in maintaining the development of her own language as a choreographer and teacher. 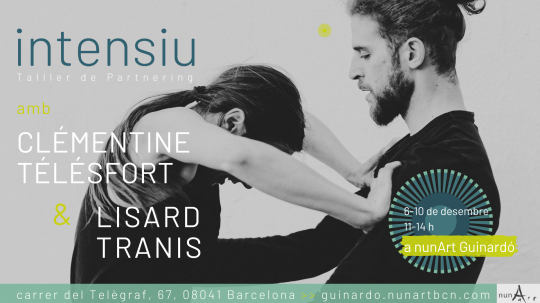